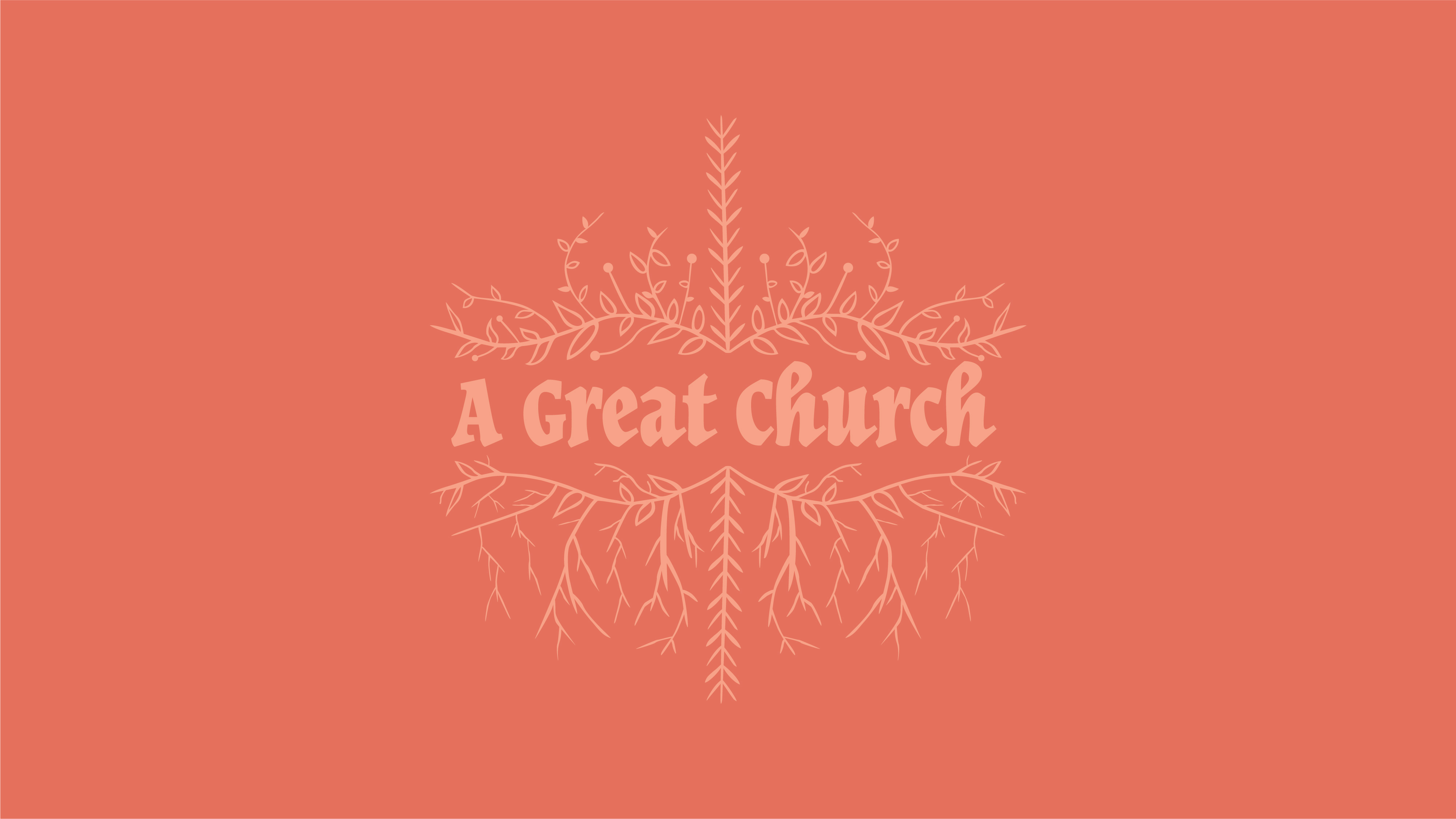 STUDY | Spend the week studying Matthew 16:13–20. Consult the commentary provided and any additional study tools to enhance your preparation.

LANDING POINT | I will build my life upon the Great Confession that Jesus is the Christ, the Son of the Living God, my risen Lord and Savior.

What are the marks of a great church? Some associate a great church with great preaching. They want solid, biblical teaching that is relevant and applicable to life. Many want a church that feels alive. Music during services, they feel, should lead God’s people into worship, whether it’s joyful praise or solemn reflection. For many, a great church means having community, whether it’s small groups, church gatherings or children and youth ministries. Still others think a great church should be about evangelism and missions. They want to take the gospel out into their community and to the world.

In this series your group will look at three teachings from Jesus about what makes a church great. Through these teachings you will see that a great church has a foundation of beliefs, lives to love God and others and has a God-given purpose.

A great church can have great impact for God’s kingdom. God has given us the tools we need to build a church where God’s people grow in love and produce fruit for His kingdom. God calls us to be great for Him and for His glory.

Q: Where do you see Pinelake’s community having an impact on others?

Q: What marks a church that isn’t great?

Up to this point, opinions varied about Jesus’s true identity. Previously in Matthew, Jesus had been rejected at Nazareth, His hometown (13:53–58). People were either confused about who Jesus was or even hostile towards Him. At one point during their journey, Jesus turned to His disciples and asked, “Who do people say I am?” One said, “John the Baptist.” Another said, “Elijah.” And another said, “Jeremiah, or one of the prophets.” Jesus listened, and then He looked at them and asked, “But who do you say I am?”

READ: Matthew 16:13–20. What would the average person say about Jesus’s identity today?

Q: Why is it significant that this event takes place in such an unlikely place?

There was silence. Then Simon answered, “You’re the Christ. The Son of the living God.” Often when Simon spoke, he had a tendency for putting his foot in his mouth. But this time he declared something with confidence that has come to be known as the Great Confession. Simon confessed the one truth that really matters, the one that unites us all as Christians.

When Jesus heard Simon’s reply, He said, “Simon, you are truly blessed because my Father revealed this truth toyou. You are Peter and upon this confession I will build My church and even the gates of hell will not be able to overcome it. I will give you and all who come after you authority to proclaim My gospel to the lost.”

Q: Recall a time when God revealed a truth to you and how that made a difference in your life.

Confessions are important to our faith because they provide a solid foundation of belief upon which we stand. To confess means to say the same thing. As a church, we believe in the power of confession. When someone is baptized in our church, they confess that Jesus is the Christ, the Son of the living God, my risen Lord and Savior. This confession binds us all together. It acts like glue to unite us as a community of believers.

Q: What difference would it make if believers made more communal confessions?

Q: How would you explain the power that confessions have to unite believers?

When Peter confessed Jesus to be “the Christ,” he was declaring that Jesus was the fulfillment of a promise God gave His people in the Old Testament. Christ means “Anointed One” or “Messiah.” Long ago God promised to send a Messiah King from David’s line. Like kings before him, this Messiah would be anointed by God and set apart for a mission. And the Messiah would have God’s favor and authority to carry out that mission.

Years before Jesus arrived, God sent messengers to foretell of this coming Messiah. We see God clearly working through these men and women throughout the Old Testament. Jesus was indeed a messenger. Jesus clearly identified Himself as the Messiah when He claimed to fulfill the prophecy given in Isaiah 61:1–2 (Luke 5:16–21).

But Jesus was more than a messenger. His anointing was for a mission bigger than overthrowing an earthly empire. He came to defeat a greater enemy: the powers of darkness, sin and death.

Q: How does seeing Jesus as victor over your enemies affect your fight against sin?

Q: What’s one way you can be a messenger of God for others this week?

JESUS THE SON OF GOD

The Bible tells us that Jesus became a man (John 1:14). He was fully human, but Jesus was also fully divine. He was the Son of God. It was difficult for many Jews in Jesus’s day to imagine that the Messiah would be God Himself. And yet the prophets of the Old Testament said that he would be (Isaiah 9:6; Jeremiah 23:5–6; Micah 5:2).

To confess that Jesus is the Son of the living God is to say, “God is real, and Jesus, You are Him.” Jesus claimed to be more than a teacher or revolutionary. He claimed to be God. He forgave sins. He promised to die and be resurrected as proof of His divinity.

C.S. Lewis wrote that you really only have three choices about Jesus’s identity. He was either a madman who thought He was God (lunatic), someone He knew He wasn’t but claimed to be (liar) or the Son of God who died and rose from the grave (Lord).

Q: Why do so many struggle to believe that Jesus is who He claimed to be? What holds them back?

Q: How does believing that Jesus is Lord over your life change the way you live?

READ: Ephesians 1:3–14 aloud as a group. What do these blessings reveal about the kind of Father God is?

Jesus declared to Peter that He would build His church on the foundation of Peter’s confession. Jesus continues His building project today. He doesn’t use wood and stone, though. His church is a spiritual structure being built up with every life He changes. These are the men and women who found the wonderful treasure that is the gospel of Jesus Christ hidden in a field and sold all they had to possess something more life-giving, rewarding and worthy than anything the world could ever offer (see Matthew 13:44).

The church is a community that believes that King Jesus is advancing His kingdom with all authority in the world today. And He’s doing it through us—through our lives and the witness we give to others about who He is and what He claimed to be.

Q: What are some ways that God has changed your life and the lives of those around you? Celebrate His handiwork.

Pray a prayer of confession, acknowledging Jesus for who He is and what He did for you and for the world.

“As a profession or declaration of belief, confession appears in both the Old and New Testaments (e.g., Job 40:14; Matt 10:32). Confession as a declaration frequently appears in the Old Testament in a corporate context (e.g., 2 Chron. 6:26; Neh. 1:6). In Matthew 10:32 and Luke 12:8, Jesus says that those who acknowledge Him before men, He also will acknowledge before the Father.

Throughout church history, councils, denominations, and individuals have developed confessions that outline their beliefs. In the early church, such confessions were termed creeds (e.g., Apostles’ Creed, Nicene Creed). Early Christian confessions of faith were primarily oral, and were rooted in the Old Testament Shema (עַמָׁש, shama’): “Hear, O Israel: The Lord our God, the Lord is one” (Deut. 6:4 NIV).”2

“Jesus’ words presented a deliberate wordplay in the text, and it is probably the most controversial statement in Matthew: ‘You are Peter (Greek, Petros, “rock”), and on this rock (Greek, petra) I will build my church.’”3 The Roman Catholic church uses this statement and what follows as a basis for papal authority. Protestants have gone in the opposite direction by regarding the “rock” (petra) as anything but Peter.4 “It is reasonable to understand Jesus’ statement to mean that Peter was one rock among a rock quarry (the disciples). It was upon this quarry of disciples (cf. ‘living stones,’ 1 Pet. 2:5) and their understanding of Peter’s confession that Jesus would build his church.”5

The Gates of Hades

“In this instance [in v. 18], this likely refers to the realm of the dead in general (the underworld)—similar to the Hebrew word she’ol. Jesus and His disciples are at Caesarea Philippi, located at thebase of Mount Hermon. This region is affiliated in ancient Near Eastern, Jewish, and Greek literature with the gateway to the underworld, the gods, and other spiritual beings. The OT also affiliates the region, called Bashan in the OT, with an evil giant clan and idolatry (Deut. 2:10–12; 3:1,10–11; Josh. 12:1–5). Jesus seems to be saying that through His power, the Church will overcome the powers of evil and death itself.”6