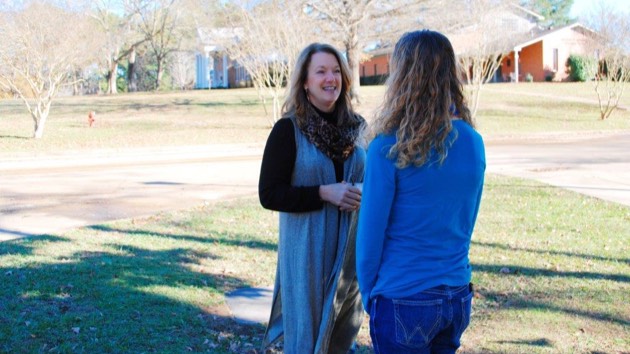 When my father died in a logging accident, my world was rocked to the core. My husband changed jobs, and we left Maryland to return to Mississippi and be closer to my mom. Over and over, God prepared the way with our transition. I knew He had a plan, and I waited and watched eagerly in the midst of overwhelming grief.

A year later, my mom moved to Brandon and started attending Pinelake Church, back when it was located on Spillway Road. Chip had just come to serve as pastor, and I was overwhelmed by the power of the Holy Spirit's comfort and hope every time I attended with my mom. God lit a fire in me that was life changing.

That’s when it happened. Clear as the writing on the wall was the writing on a feedbag! As I fed my and my father’s horses one morning, there was an ad on a feedbag (for what is now the Professional Association for Therapeutic Horsemanship) that changed my life. Heart's Desire Therapeutic Riding Center (Psalm 37:4) was formed, and for the next 10 years we would minister to families of special needs children through that ministry. Our ministry and impact for the Gospel grew every year, and our staff members were dedicated and kingdom-minded. God provided financially, and our home and lives were open to whomever He brought to us.

Then, my mom called in 2004 with three words that changed everything again: “I have cancer.”

For the next 18 months we watched her fade in body, but blossom in spirit as she touched the lives of everyone she met. In every office and hospital room, she shared the love and assurance of Christ in her — the hope of glory. She brought tears to the eyes of her doctor as she prayed for him in her last days. She shared her faith with the hospice nurse who said, “This is how death should be.”

I pressed on until the grief took over, and I crumbled before God, crying that He asked so much of me. But I also realized that He had given so much to me. My perception of God continued to grow. My understanding increased, and I began to open my hands in complete surrender. With surrender, I’ve found, comes challenge and testing. The next year my husband suffered a massive heart attack and almost died. The next year, he had another that required triple bypass surgery, and again, he almost died. Three months later he lost his job. He was uninsurable, and no one wanted to hire him in his field.

A year later we lost our home and sold everything we could sell. Around that time, God led me to leave Heart's Desire, the ministry I’d started. I felt my life was being drained away piece by piece. Still, right in the middle of all that, I could hear Him say, “Trust me. Lean on me. Be still, and let go.” I can't even tell you all the details He took care of, but as we faced the very real threat of homelessness, He moved a seemingly insurmountable mountain again. We ended up in the little town of French Camp, mile marker 181 on the Natchez Trace, in the middle of nowhere.

We came to French Camp Academy as houseparents to elementary boys, and my husband had renewed his dormant teaching certificate to teach high school history, his first career love. In our second year as house parents, he suffered a stroke while in the classroom. God blessed, and he recovered. But it took its toll, and his stamina would not allow us to continue in the role of houseparenting, though he continued to teach.

About the same time, I had finished my Biblical Counseling Certificate and began to do some counseling and became the relief sub for the girls side of campus. Over the next two years, I did more and more counseling until I became the Family Counselor at French Camp Academy. God's perfect provision has been amazing — even in the middle of all these trials — and the community of faith and support is such a blessing.

God's perfect provision has been amazing — even in the middle of all these trials — and the community of faith and support is such a blessing.

As we live life with the students God places at French Camp, we hear such pain and loss. Abuse, abandonment, rebellion, grief and dysfunction of families — these children truly need the healing and redemptive power of Christ. We have students who are believers, but many have never truly been discipled. Students who come to know Christ struggle daily with the battles of the past.

When our daughter attended Mississippi State University, she got involved at Pinelake. So, we began coming over to spend time with her at church and take her to lunch. Then, our son got married and now lives right across from Pinelake. You could say it was becoming a family affair. Even with the long drive, we came more and more. It encouraged and recharged us. As we could, we also brought a few students with us.

When re:DISCIPLE was announced, I knew I wanted to take part because my daily focus is discipling the kids, living a Jesus-centered life in front of them and growing relationships with them and their families. I decided to see if a couple of the girls at the camp would want to attend with me. One girl, a freshman, was a new believer of less than a month; the other was a senior, who was a believer, but had gotten off course and was living in regret and struggling with identity and forgiveness. I explained it was a commitment of several hours, and it was learning experience (not necessarily “fun”). Still, they agreed and were excited.

After Basic Training, a light began to shine in them both. Their desire to be in the Word began to grow and take shape as they invited other girls to do a Bible study with them. They led other girls in their dorm to faith in Christ, and their excitement was contagious. Instead of being overwhelmed with their issues and struggles, they began to talk about them, and we searched the Scriptures for answers, asking God to give them clear direction.

After Basic Training, a light began to shine in them both.

And that’s exactly what He did. They experienced answers to their prayers, and they began to see themselves as being able to help others in their struggles. Their houseparent has seen the change in their dedication and commitment. They are not perfect, but they are growing. I could have spent weeks trying to accomplish what they got in Basic Training.

The girls were eager to return and attend the next level, and both went back to French Camp and approached girls about going through the study with them. They commented on how helpful it was to experience the process of discipleship with others outside their own community. They are becoming stronger and more at ease with talking about their own faith and pointing others to Christ because they practice in the safety of other believers and hear their stories and presentations. They are learning to listen to the Word as they attend our campus church and understand the personal message of Scripture.

I know this is the work of the Holy Spirit, but re:DISCIPLE gave them an opportunity for learning about living a life centered around Jesus Christ. It helped them put the life message they were hearing at French Camp into perspective.

Psalm 71 is my heart prayer, and I want this generation to know the works of my God and the redemption of Christ. That desire truly took root at French Camp and through re:DISCIPLE. At times I have struggled to not grow weary as I wonder if anything I am doing is making an impact. But I have been so encouraged in my own faith by those two. To invest in their lives at this level and nurture them as they disciple others and to see them take ownership has been so rewarding. God is using the girls to encourage me in the ministry He has me in.

I can truly say I have no greater joy than to see “my children” walk in Truth! It is a joyful journey, even when there are many that don't choose to follow. But to know I have several waiting to attend the next training — that’s just incredible! I am just amazed and praising God!